Why Australian business needs to wake up to Indonesia

by Stephane Chatonsky   March, 22 (East Asia Forum) – It has been more than 20 years since former Australia prime minister Paul Keating declared that ‘no country is more important to Australia than Indonesia. If we fail to get this relationship right, and nurture and develop it, the whole web of our foreign relations is incomplete’. What has changed since then and what progress has been made? 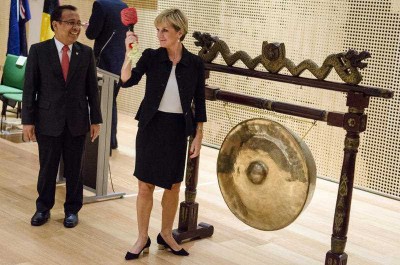 Indonesia has become a much larger economy. GDP has roughly quadrupled since 1994, and per capita GDP has nearly tripled. The difference is accounted for by the absolute growth in the population, which has risen from 192 million in 1994 to about 256 million this year. Since 1994, Indonesia’s GDP has grown by around 4.8 per cent annually on average. That is about 1 per cent annually more than the global economy over that period. If not for the impact of the Asian financial crisis in the late 1990s, Indonesia’s economy would have expanded even more quickly.

Governance in Indonesia has also improved. In 1999, for instance, the World Economic Forum (WEF) ranked Indonesia in the bottom decile of the countries it surveyed for its Global Competitiveness Report (GCR). In the GCR for 2007–08, Indonesia was in the lower part of the second quartile. In the latest GCR, for 2015–16, Indonesia is in the top quartile. WEF researchers have found positive trends in levels of corruption and governance since 2008–09.

This economic miracle has not gone unnoticed. Inwards foreign direct investment (FDI) was under US$7 billion annually in 2005–07, prior to the global financial crisis. Since 2011, it has been running at around US$20–25 billion annually. The total stock of inwards FDI has risen from 8.4 per cent to 28.5 per cent of GDP.

One might expect that Australian enterprises have been at the forefront of FDI investors. But in 2015, Australian direct investment in Indonesia trailed that of Malaysia, Japan, South Korea and Thailand. Other countries that accounted for similar amounts of FDI into Indonesia as Australia in 2015 included Italy, Taiwan and France.

This is despite the fact that the opportunities for Australian business in Indonesia are huge. The number of people in Indonesia’s consumer class is expected to grow from 45 million in 2015 to 135 million in 2020. This will result in a very rapid rise in demand for a broad range of goods and services. In the healthcare sector alone — where Australia has a distinct competitive advantage — there is need for hospitals and clinics, healthcare professional training, aged care, laboratory facilities and diagnostics, tele-medicine (particularly outside Java) and medical equipment and devices (about 85 per cent of which are currently imported from outside Indonesia).

In the education sector Indonesia’s National Educational Certification Agency (BNSP) has identified a number of areas where Australian organisations might provide content and deliver training and assessment. These areas include aviation services, online services, tourism and hospitality services, health services, logistics services, agricultural-based products and a number of manufactured products. Renewable energy is another sector with potential. The Indonesian government wants to boost renewables’ share of the country’s energy mix from the current 5–6 per cent to 19 per cent by 2019.

Unfortunately, this has not been recognised in the teaching of Asian languages in Australian universities. In 1994, a working group headed by a Queensland civil servant named Kevin Rudd, who would later become prime minister, prepared a report for the Council of Australian Governments (COAG) that highlighted the importance of Asian languages for Australian schools. Since then, results have been very mixed, in regards to Bahasa Indonesia at least. In the last few years, increasing numbers of Australian tertiary students have headed to Indonesia to study. But enrolments in Indonesian language courses fell by 37 per cent over the decade to 2010 and have yet to recover.

The narrative needs to be changed, and very quickly. Since Keating’s speech, the story has been that there are huge opportunities for Australia in its giant neighbour to the North. But the brutal reality is that not much has changed in Australia’s engagement with Indonesia. The Australian business community and the Australian government needs to move very quickly if they are not to lose those opportunities to others who have already recognised the extraordinary transformation of Indonesia. If this narrative does not change quickly Australia will have missed the boat to Indonesia.